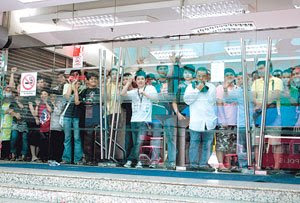 It was the second day after the government abolished Internal Security Act (ISA) at Bolehland. The newspaper is publishing a statement of one Malay chauvinist from an NGO that stir unrest in the Bolehland. Sedition Act 1948 is just too kacang for him to face seems that more and more Malay are tend to support him.

( All Chinese & Indian must stop their vernacular system. This is including their language, names that based on their language. All vernacular school and newspapers must be abolished! I call for all Malay to be with me and emphasize on this idea by following the footstep of the nation makers of Thailand, Indonesia and the Philipines to wage a war against the agent of seclusion, the vernacular system!)

Few days after that, the NGO leader was caught by the authority. But more and more people become aware on his idea. Supports came from all four corners.

Some are chanting for "balik tongsan" and "balik india" phrases. The Chinese and Indian are in total limbo. Yes. It is only in this country that they could not only practise, but fortify their proefficency of their mothertongue at least until now.

They have been denied this at Burma, Thailand, Philipines, Indonesia and also at Vietnam, which are adjacently located with China since the early age of those country.

Now, does abolishing ISA really give them benefit more than liabilities? Verily, on such kind of time, they will be the party that cries out loud to reinstate ISA.

This is only an example that I think, will arise without impossibilities. Besides, we can see that the Abolish ISA Movement mobs on Aug 1, 2009 at the center of KL city that created chaos and losses to the petty street traders, has only drew Malay mobsters. Where was the large number of non-Malay that so-called " a prominent opponent of the government?"

Maybe, the non-Malay section is too busy with their money making business and let those Malays compatriots fight for them on the street. Maybe they have the " choosen people - goyim " kind of attitude in this. And stupid Malays are yelling out like mad mobsters for something that they don't really understand. Not even fight on the street, they can also pray on the street.

This might later be the right reason of some one else among them to say " WHAT WAS THE REASON FOR MUSLIMS TO BUILD MOSQUE MORE AND MORE... THEY CAN EVEN PRAY ON THE STREETS.. UNLIKE US.. WE NEED TEMPLES TO PRAY!" Now.. that really sounds bad.

Nothing can turn my idea wrong when the Selangor PKR started to have the "1 Masjid 1 Church" campaign. Sounds infidel but yes, they really have guts to take over the outreach jobs. Now mobsters that pray on the dirty street... Why don't you guys show your dissatisfaction in the same way? Are you wish to solat on Federal Highway?

They will never do that because they perform solat on the street on that stupid day is all about to indicate their showing-off attitude. What will you get by showing off kind of solat? Nothing!
2 comments: