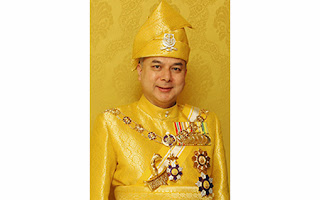 Raja Nazrin has an academic and intellectual background with a bachelor's degree in Philosophy, Politics and Economicsfrom Worcester College, Oxford.
He also holds a Masters in Public Administration from the Kennedy School of government, Harvard; and Ph.D in Political Economy and Government from Harvard University.
Raja Nazrin's research interests are in the area of economic and political development in South-East and North-East Asia, historical national income accounting and economic growth in developing countries.
The prince has also written articles and spoken on a wide range of issues including the role of the constitutional monarchy in Malaysia, education, Islam, ethnic relations and economic development.
He has assumed the role of Financial Ambassador of the Malaysian International Islamic Financial Centre (MIFC), has been Pro-Chancellor of Universiti Malaya since 1989 and is the chairman of the Board of Governors of the Malay College Kuala Kangsar.
He recently consented to becoming an Eminent Fellow of the Institute of Strategic and International Studies (Isis) Malaysia effective 1 May.

The Raja Muda of Perak married Zara Salim Davidson at Istana Iskandariah, Bukit Chandan, on 17 May 2007. This was announced by the Comptroller of the Perak royal household, Raja Datuk Seri Mansur Raja Razman.
Raja Nazrin and Zara have known each other for eight years.
A day after the solemnisation of their vows, there was a special proclamation ceremony to bestow Zara with the official title of Raja Puan Besar of Perak. Sultan Azlan Shah had consented to the proclamation of Raja Nazrin's bride Zara Salim Davidson as the Raja Puan Besar of Perak and the conferment of the Darjah Kerabat on her.
The royal wedding reception took place on 19 May 2007.
The first child of the couple, Raja Azlan Muzaffar Shah, was born on 14 March 2008. The second child, a princess, Raja Nazira Safya Shah was born 3 August 2011.
He has been awarded:[3]