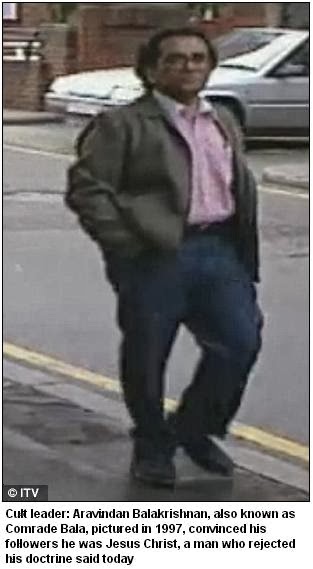 The sister of a Malaysian student allegedly enslaved by an extreme Left-wing sect for decades has today flown into Britain to see her 'before either of us dies'.

Retired teacher Kamar Mautum says one of the three captives freed last month is her sibling Aishah Wahab, who disappeared after joining the Maoist faction based in Brixton, south London.

She has landed at Heathrow with documents said to prove the captive is her sister and now hopes to see her for the first time in at least 30 years.

Malaysian Kamar Mautum, a retired teacher, arrives at Heathrow from Kuala Lumpur, she believes her 69 year old sister, Aishah, may be one of the women allegedly held captive in South London

As she boarded a flight from Kuala Lumpur to London last night to be reunited with her sister, now aged 69, Mrs Mautum said: ‘I have felt so choked without her for years and years.
‘She was so talented; she was the apple of my mother’s eye. She asked for her on her deathbed.’
Miss Wahab is believed to have suffered a stroke while she was allegedly held captive by sect leaders Aravindan Balakrishnan and his partner Chanda, who were arrested in Brixton, South London last week.

Her sister added: ‘This has been a dark age for her and for all of us. I will do anything to bring her home. I want to see her before either of us dies. I am not sure if she will remember me but I am hopeful she will.
‘I hope her health is OK and she is receiving all the help she needs.’

Aishah’s eldest sister, Hasnah Abdul Wahab, 88, said: 'I will hug her and cry if she comes back home'.
She told AFP at her Malaysian home: 'I thank Allah - he has realised my prayers to meet Aishah before I die.

'We have been looking for her for a long, long time.'

Neighbours said today that over a number of years they may have seen the 'slaves' standing at windows for hours on end and one would sometimes hold notes.

Charlotte Watts, who lived near where Aravindan Balakrishnan and his wife Chanda lived in Brixton, told the Evening Standard: 'Because (the window) was so high up and (the notes) were in Biro, I could never read what they were saying, so I feel desperately sad if she was trying to communicate something.'

Miss Wahab won a Commonwealth scholarship to study surveying in the UK and moved here in 1968 with her fiance Omar Munir. But she soon became involved in extremist politics and turned her back on her middle-class upbringing.

Attracted to Balakrishnan’s group, Miss Wahab was so in awe of leader ‘Comrade Bala’ that she and Omar rowed over her ‘loyalty’ to him and eventually split, throwing her engagement ring in the Thames.

The Malaysian government is said to have been wary about her returning home because of her politics.

Miss Mautum said their brother, who lived in London, discouraged visits by his Maoist sister.
‘Aishah’s attitude was, “if you don’t want me, fine”. And then she disappeared,’ said Miss Mautum.
The family later asked a prominent Malaysian radical, Ishammuddin Rais, to help find her, without success.

Balakrishnan’s group eventually folded but Miss Wahab is believed to have remained one of his few followers.

A former member claimed she ‘cut herself off from everybody’, adding: ‘She remained with them, was financially dependent on them, had no friends – she became more and more reliant on them.’

Video footage of Aishah emerged last night after she was filmed in the doorway of a south London property, shouting at a man who has asked to speak to Comrade Bala.

The ITV report says that a Malaysian woman, seen wearing glasses and a plaid shirt, is believed to be Aishah.

The women are set to be formally interviewed by police today, according to reports.

One of the women rescued from a Brixton council flat last month was the daughter of a renowned Bletchley Park codebreaker during the Second World War, it was also revealed.

The 64-year-old retired teacher, who has called for her cousin’s death to be investigated again, said: ‘She had everything going for her, such a promising and bright future.

She met Comrade Bala and his wife whilst at university in London and I don’t know why, but she got sucked into his warped way of thinking and she became brainwashed.’

A total of 47 officers are now working on the inquiry, launched after one of the women - a 30-year-old Briton, a 57-year-old Irishwoman and a 69-year-old Malaysian - contacted staff from the Freedom
Charity last month, and eventually left the house in Brixton, south London, where they said they were being held.

Police agreed to wait until last week to arrest the suspected captors, said to be Maoist activists Aravindan Balakrishnan and his wife, Chanda Pattni. 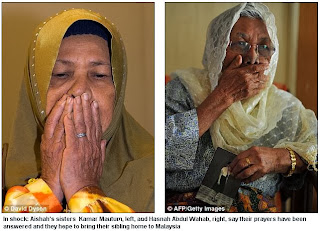 Commander Steve Rodhouse also said his team have requested court papers from the inquest into the death of Sian Davies, who was fatally injured when she fell from a window of a house used by the political group in Herne Hill, south London.
slave victims
Police were not called to the house at the time of her death, but Mr Rodhouse is looking at which inquiries officers carried out on behalf of the coroner, who reached an open verdict.

'We have retrieved the court papers, the inquest papers, and we are in the process of reviewing those to see what they can tell us about the police involvement in that inquiry', he said.

'We were not called to the address at the time of Sian's death but we are reviewing what later involvement we had in assisting the coroner to come to that open verdict.'

It is not yet clear what contact the women had with police, social and health services during the 30 years, he said.

Investigators are currently contacting 50 potential witnesses as part of their inquiry. 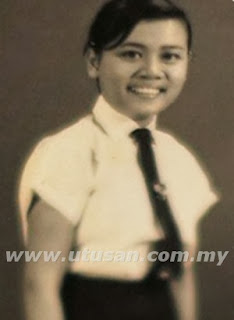