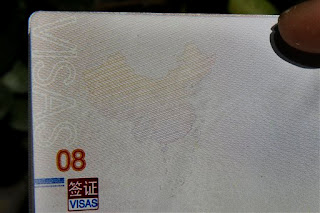 
A map that China has incorporated into its passports has drawn diplomatic fury because it appears to claim the entire South China Sea, ignoring competing claims from the Philippines, Vietnam and other countries.
Philippine Foreign Secretary Albert del Rosario told reporters in Manila that he sent a note to the Chinese Embassy that his country "strongly protests" Beijing's inclusion of an image showing China's claimed maritime borders in its new passport.
Del Rosario says China's claims include an area that is "clearly part of the Philippines' territory and maritime domain."
The Vietnamese government said it had also sent a diplomatic note to the Chinese embassy in Hanoi, demanding that Beijing remove the "erroneous content" printed in the passport.
In Beijing, the Foreign Ministry said the new passport was issued based on international standards.
"The outline map of China on the passport is not directed against any particular country," Foreign Ministry spokeswoman Hua Chunying said Thursday.
China maintains it has ancient claims to all of the South China Sea, despite much of it being within the exclusive economic zones of Southeast Asian neighbors. The potentially oil- and gas-rich South China Sea islands and waters also are claimed by the Philippines, Vietnam, Taiwan, Brunei and Malaysia.
There are concerns that the disputes could escalate into violence. China and the Philippines had a tense maritime standoff at a shoal west of the main Philippine island of Luzon early this year.
The United States, which has said it takes no sides in the territorial spats but that it considers ensuring safe maritime traffic in the waters to be in its national interest, has backed a call for a "code of conduct" to prevent clashes in the disputed territories. But it remains unclear if and when China will sit down with rival claimants to draft such a legally binding nonaggression pact.
The Philippines, Brunei, Malaysia and Vietnam are scheduled to meet Dec. 12 to discuss claims in the South China Sea and the role of China.
---
Associated Press writers Chris Brummitt in Hanoi, Vietnam, and Zhao Liang in Beijing contributed to this report.
No comments: