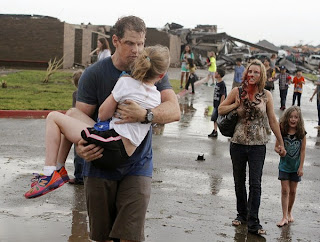 UNTHINKABLE: AT LEAST 20 CHILDREN, SOME OF WHICH DROWNED, AMONG THE 91 REPORTEDLY KILLED IN OKLAHOMA TORNADO

UPDATE 12:53 a.m. — Amy Elliot, the chief administrative officer of the Oklahoma office of the Chief Medical Examiner, told CNN's Piers Morgan that 40 additional bodies have been discovered — bringing the death toll to at least 91.

Appearing live on CNN Monday night, Amy Elliot, the chief administrative officer of the Oklahoma office of the Chief Medical Examiner, confirmed that 51 people are dead in the aftermath of the massive tornado outside of Oklahoma City. Tragically, at least 20 of those who died are children, she added.

Elliot also said the medical examiner's office has received calls from officials informing them to expect even more victims.

Seven children were killed at Plaza Towers Elementary School in Moore, Okla., according to a police official. CNN reports that emergency personnel were searching through the rubble at the school looking for additional children.

At least 145 people have been hospitalized in the Oklahoma City area following the deadly twister, hospital officials said.