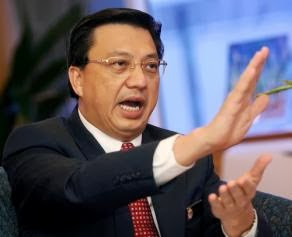 KUALA LUMPUR: MCA deputy president Datuk Seri Liow Tiong Lai has accepted the apology by Astro AEC host Gan Jiang Han who posted a message that a blackout had allegedly occurred in Bentong that led to the Barisan Nasional winning the parliamentary seat in the May 5 polls.

Liow said the Astro AEC should also carry the apology as a news report in one of its shows.

"It must tell the truth and only then will the rumours stop spreading," Liow said in a statement Monday.

Liow had expressed his unhappiness over Gan's posting on his Facebook fanpage.

Liow had said that it misled the people into believing there was indeed a blackout at the Bentong counting centre.

Liow hoped that Gan would cooperate with the police in its investigation to establish how the blackout rumour began in the first place.

"The rumour is not only a form of character assassination, it also damaged the credibility of the Barisan and created anger and dissatisfaction among the public," he said.

On Monday, Sin Chew Daily reported that Gan had apologised to Liow.

Gan had said in a statement that he posted the message in his personal capacity and took responsibility over the controversy it had caused.

He added that he had deleted the message, clarified the incident and issued an apology on May 7.

Gan got Astro AEC into hot water when he posted on his Facebook that "when my child is born, I will ask him to write an essay with the title, The Blackout Night.

"The beginning of the essay would be on May 5, 2013, there was a stiff fight in the Bentong seat. Someone had said that he would cut his ears if it is lost, and then the counting process started, blackout..."

Several reporters as well as DAP assemblymen Chow Yu Hui (Bilut) and Lee Chin Chen (Ketari) clarified later that there was no blackout or any sudden "appearance" of a ballot box.