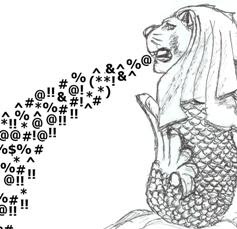 Max:
December 13, 2010 at 11:56 am Max(Quote)
Still trying to figure out the saying “politics is dirty”. Whatsoever, let’s stay focus on the “bread and butter” issues for Singaporeans. How and what must we do to get Singapore and Singaporeans out of the unhealthy situation?

Mad Hatter:
December 13, 2010 at 12:37 pm Mad Hatter(Quote)
Last night I had the strangest dream
I’ve ever dreamt before.
I dreamt that Opposition parties
will rule in Msia & Singapore.
They deserve one another. Period!

PAP Sucks:
December 13, 2010 at 12:48 pm PAP Sucks(Quote)
If Malaysia wants to prove Singapore wrong and show that Malaysian politicians are not incompetent, Malaysia should cut off the water supply?That would suck, since we need to wash our clothes.PAP ministers of course can import expensive Zegna shirts from Italy by the truck load or have their maids wash their clothes with imported Evian spring water from France.The rest of us lesser mortals, we will have to drink NEW WATER.
Lol!

RMorgan:
December 13, 2010 at 2:09 pm RMorgan(Quote)
It is said the biggest sin of all sins is to talk bad about somebody behind his back. The reason being it is unfair as he is unable to defend himself and naturally anybody will get angry when he gets to know about things said behind his back. However there are hundreds of officials representing the government in various capacities. So it stand to reason that you cannot gag each and everyone of them.Not all of them are smart, intelligent and efficient as they appear or are made out to be. Some of them are downright arrogant and obviously plain stupid as the leaks revealed. They are not that brainy after all.

Dawn:
December 13, 2010 at 2:42 pm Dawn(Quote)
Our 3 stooges pranced with the US Deputy Secretary of Defense for East Asia David Sedney to get adulations!So embarassing for PAPigs but it must be so galling for our neighbouring political leaders!

Serious Thots:
December 13, 2010 at 3:16 pm Serious Thots(Quote)
Where is our Prime Minister Lee Hsien Loong?
He behaves exactly like a spoilt TV – no picture and no sound.
George Yeo, his comrade is the meantime taking the heat for something he did not do. So much for our Prime Minister.

Baby Boomer:
December 13, 2010 at 5:00 pm Baby Boomer(Quote)
Isn’t it a coincidence that things are turning out bad for the ruling party just when they thought they have buried the negatives of last 4 years with massive propaganda, and are preparing a bag of goodies just before GE 2011 so they can have another clean sweep of the seats.I’m sure there will be more worms coming out of the can to teach these arrogant, power addicted people a good lesson.And I hope the voting Singaporeans will teach the greatest lesson of all.

nihon:
December 13, 2010 at 10:29 pm nihon(Quote)
NOT surprising at all, afterall the papigs always rely on smear and slander to win, i have met many papigs’ lackeys n running dogs, and they usually slander and backstab their colleagues at work, and always wayang, sarkar (curry favour) but can’t work.sheer hypocrisy – eg. The bapok mp maliki, just a backstabbing good for nothing, useless goon.that’s why we are suffering due to their failed policies, need to vote in the new parties.

atobe:
December 14, 2010 at 2:45 am atobe(Quote)
It all depends on the character of the Malaysian PM that is currently in office.
During Mahathir’s term, he practically encourages his ministers and Members of Parliament at the Federal and State levels to be as vitrolic as he was.
This saw a complete change when Badawi took over as PM, and now with Najib since 2009.With these two persons in the Malaysian PM’s Office, the relationship between Malaysia and Singapore took on a more positive change, with many disruptive issues suddenly resolved amicably.The Wikileaks that exposed the back-stabbing remarks made as recent as 2008 and 2009 will surely be a blemishing mark on Singapore’s Government, especially when these were made during the term of the two friendliest Malaysian PM after more then 20 years !!!Singapore’s friends will surely ask themselves – “with friends like this, who needs any enemies” ?