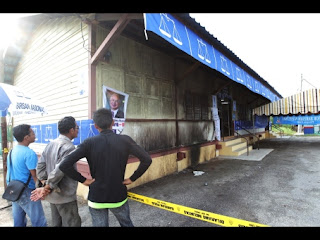 SEKINCHAN: The Barisan Nasional operations room in Parit 9 Baruh, Sungai Leman here nearly caught fire in the wee hours of this morning after a suspected petrol bomb was thrown in its direction, hitting a BN banner before spreading onto the front part of the building.

A villager, who happened to pass by, noticed the incident and immediately contacted the Village Development Committee of the Federal Government (JKKKP), who arrived on time with other party members and put out the fire before it spread further.
Parit 9 Sungai Leman JKKKP chairman Zulkafli Hassan, 52, expressed relief that the 30-year-old centre was saved from being completely destroyed in the 4am incident.
A police report was also lodged on the incident at the Sekinchan police station earlier this morning, with investigations ongoing to find the perpetrators.
"The party machinery was at the centre until 2.30am this morning. Those responsible for this vile act must have been watching us and waited for us to go home before striking.
"I only found out about the incident after being informed by a friend. We suspect this is a ploy to sabotage BN, but I want to stress that this has not deterred our spirit, and we are more fired up than ever too ensure BN wins," he said.
For Umno supporters in the area, the operations room is of nostalgic value to them as it had been the gathering point
for party members for decades, and had also been visited by prominent party leaders.
The operations centre's land owner Ismail Sutan, 72, expressed regret that irresponsible parties had resorted to "dirty campaign tactics".
"All parties must be positive and campaign morally.  Trying to set fire to the centre, which also serves as a town hall, is unacceptable," he said.
Meanwhile, Sabak Bernam district police chief Superintendent Noor Mushar Mohamad, when contacted, said he rushed to the site after receiving a phone call, and found a plastic mineral bottle suspected to be a petrol bomb.
He said the petrol bomb could have been thrown from a vehicle as it approached the front of the operations room, hitting the BN banner which was hung there.
However, he refused to speculate if the act was committed by the opposition party as investigations were still ongoing. He said they would also wait for the forensics report before ascertaining the cause.
"The police are trying to identify the individuals involved and will arrest them soon. All parties should remain calm and not resort to taking the law into their own hands. Leave it to the police to handle," he said.
The case is being investigated under Section 435 of the Penal Code for causing damage by fire.

confirmed did by nga & ngeh...