For once and all, I write down this confession for my former party that I fight for, free of charge, not based on it upbringing today but based on it way of existence that lead to give citizenship to almost 2 million foreign migrants that stranded stateless in Malaya when their due date for departure i.e. The Independence of Malaya is getting closer and closer.

This is what you request for. It serves you right. Right on your forehead.

What have you people gotten from the party post brawl right before the election. A post in a defeated party that yelling as opposition for the first time? 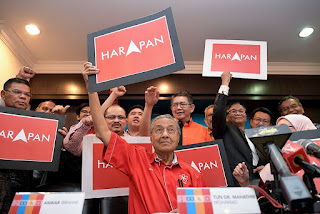 And corrupted grassroot leaders that oportunistcly jump boat and secure their continuity in coalition that acknowledge you as a clean decent comrade?

So the bullshit is stirring in a pail that waiting to be thrown to the people.

The non Malay owed a grandest gratitude to their savior, UMNO and yet, they demean, foulmouthing and curse with standing ovation by few months old ex UMNO turned PPBM that wasting more than half of their lifetime chanting repulsive word of 'Hidup Melayu' with UMNO, as UMNO is the key player in assuring their citizenship as Malayan and eradicate their hesitation by the highest degree of courtesy of it leaders.

This, for God forsaken reason, saves them as if unification with Indonesia again attempted by Soekarno that distant itself from Malaya to avoid blame on the Bintang Tiga armed siege, with their Indonesian Chinese already becoming the citizen far early during the Dutch age, will surely put stateless migrant of Malaya to mass deportation or worse, brutal discrimination.

It is far from doubt that Malay can't be classified as migrant too as you can see, orang Asli could understand and verse in Malay but none are able to liase with the language of another two until today. Was that clear enough?

By provoking , an opposition can be seen brave and reliable but not for a government. Adding the nature of denial with zillionth buried questions, a provoking goverment is potraying nothing but kiasu regime that too scared to face critics that once becoming skills they mastered in.

To escape this whirlpool of blames, denial, wrong statements, disputed measures that will further weakened the economy which might be a payback in respective to baseless false allegation on it's  previous healthy development, every Malaysian need to put their election fever off, setting all their rascal words muted and allow each of our assistence in making Malaysia great again, from the ailment it get by the short minded citizen.

Nobody cares the drop of Ringgit recently as long as Najib overthrown said the same cai that addicted to condemn Najib on daily basis, triple fold with the previous fall of ringgit.

But at least stop spending your money in other currency. Will anyone heed my same old advice now and then?

If they don't care about what did PH promised for the winning, I don't care on Dr. Mahathir statement before again made Prime Minister that if he was the PM, the ringgit will get it value again on the next day.

Enough with past PM whom never care. It is now the matter of, do you actually care? If you're actually fake a hardship grouse, for all right serving, you might now being led by a person that faking up a whole newly worn leadership.

But he, as me too, might in thorough research, that if yes my fellow citizen are mostly uneducated in specific degree of knowledge affecting the way they weigh an important decision to consider, how worse they possibly be.