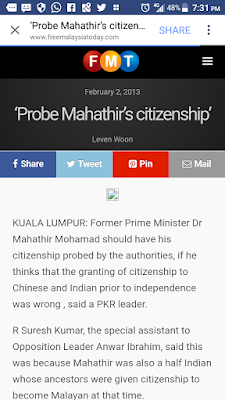 KUALA LUMPUR: Former Prime Minister Dr Mahathir Mohamad should have his citizenship probed by the authorities, if he thinks that the granting of citizenship to Chinese and Indian prior to independence was wrong , said a PKR leader.

R Suresh Kumar, the special assistant to Opposition Leader Anwar Ibrahim, said this was because Mahathir was also a half Indian whose ancestors were given citizenship to become Malayan at that time.

“The full name of Mahathir is Mahathir Mohd Iskandar Kutty. The word Kutty suggests that his dad was an Indian Muslim.

“If he is questioning the granting to citizenship to Indians and Chinese before independence, then his ancestors must be investigated too. And also his own citizenship,” he said at a protest rally against Mahathir in Brickfields today.

Last month, the former premier said the granting of citizenship to Sabah immigrants during his tenure could be equated to the same policy by Malaysia’s first Prime Minister Tunku Abdul Rahman to Indian and Chinese immigrants prior to Independence.

He claimed that Tunku has awarded citizenship  even though it was not provided in the law at that  time.

“This situation came about because the Malays are generous and prepared to dilute their power, and this is very different from what happened in Sabah because they had the right to have citizenships,” he added when asked to comment on the criticisms against him regarding the granting of citizenship to immigrants in Sabah.


Various opposition leaders have since condemned Mahathir’s statements and labelled it  as inappropriate and misleading, while MCA chief Dr Chua Soi Lek said he was unsure whether Mahathir was saying that in jest or not.

Today, a group of 60 people from various NGO and political parties staged a 30-minute protest at the elephant fountain in Brickfields against Mahathir.

Holding up banners bearing Mahathir’s portraits with the captions “The nation’s traitor”, “The biggest liar”, “the most insulting individual”, they demanded an apology from the former premier within a week.

The group later lodged a police report against the Mahathir for uttering seditious statements.

Tamil Action Force deputy secretary Kannan Ramasamy pointed out that Mahathir’s claims was a non-issue because all British colonies that time had given citizenship to non-natives based on jus soli principle.

Jus soli is a right by which nationality or citizenship can be recognized to any individual born in the territory of the related state.

“A total of 42 commonwealth countries including Sri Lanka and  Jamaica have done this,” he said.

Kannan said in contrast, Mahathir’s granting of citizenship to Sabah immigrants was for the latter’s political survival because the then state ruling party, Parti Bersatu Sabah had pulled out from BN on the eve of General Election 1990.

“BN was left in lurch in Sabah because PBS joined (Tengku Razaleigh-led) Semangat 46. (Then Deputy Prime Minister)  Ghafar Baba was sent to Sabah to form Umno. But there was only 7.9 percent Malays in Sabah that time. So Mahathir began to give out citizenship to make sure he got enough Umno members.

“Today, Sabah Umno has got the largest membership as compared to other states,” he claimed.

Malaysia Indian Progressive Association’s (MIPAS) AP Raja Retinam  questioned the logic to grant citizenship to the Philippines Muslim whom,  in contrary to the pre-Independence Indian or Chinese, did not contribute to the country.

“Indians built the first road and railway. Don’t insult us by comparing us with the war refugees and illegal immigrants from Philippines in Sabah,” he said.

He said a huge rally would be held on Feb 23 at 6pm in KL and Selangor Chinese Assembly Hall to press Mahathir to retract his statement and apologise.

Meanwhile, MIPAS secretary-general S Barathidasan urged the authorities to revoke Tunship granted to Mahathir, saying that the former strongman was not fit to be a Tun. 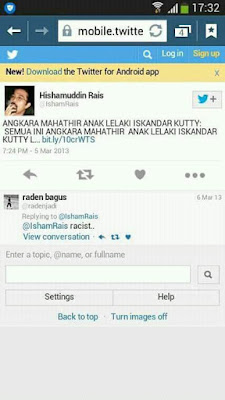